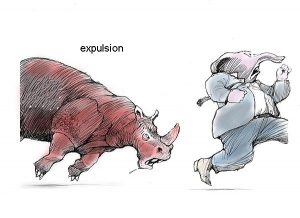 Removal of LLC Member May Be ‘Prospective’ Conduct

In what is probably the most significant appellate decision involving New Jersey limited liability companies in a decade, the Appellate Division held that wrongful conduct is not required to expel a member from the LLC, nor is the member entitled to be paid for the value of the interests.

On the contrary, the opinion in All Saints University of Medicine Aruba v. Chilana, Docket No. A-2628-09T1, App. Div Dec. 24, 2012, makes clear the standard can be much lower: conduct that makes it not reasonably practicable to continue the business with the member. The former member, moreover, cannot compel purchase of their interests. They are relegated to the status of assignee, forfeiting all of their management rights but still retaining their financial interest in the business.

Expelling a member from a New Jersey limited liability company requires a judicial order, unless the LLC’s operating agreement contains specific provisions that permit for the expulsion of members. Litigation over the expulsion of members, referred to in the New Jersey Limited Liability Company Act as involuntary dissociation, typically focuses on wrongful conduct by the member whose ouster is sought.

Wrongful Conduct is Not a Requirement

The frequent assumption that wrongful conduct is required to remove a member from a limited liability company. The Appellate Division decision in All Saints is a major opinion clarifying the application of the provisions in the New Jersey Limited Liability Company Act that govern the removal of LLC members. The opinion is important for two reasons.

The factual background of the case involved an LLC formed in New Jersey to operate a medical school in Aruba. The project ran into trouble and disputes broke out between the four members of the LLC. One of the key issues in the case was that the LLC was desperately short of cash and one of the members was willing to put money into the business, but only if other members were dissociated.

The case went to trial and the judge found that two of the members should be expelled based both on the existence of prior wrongful conduct and also because it was no longer reasonably practicable to continue the LLC with their participation. The lower court then proceeded to make a valuation determination under the assumption that the expelled members had a right to be paid for the fair value of their shares. It turned out that the business had no value, but the Appellate Division found that the assumption itself was in error.

The case involves construction of N.J.S.A. 42:2B-24, which provides the circumstances under which an LLC member can be involuntarily dissociated, that is, expelled, from a limited liability company by judicial order for the following reasons:

(a) the member engaged in wrongful conduct that adversely and materially affected the limited liability company’s business;

(b) the member willfully or persistently committed a material breach of the operating agreement; or

The Appellate Division held that the statute is to be read in the disjunctive, in other words any one of the three reasons provided for in the statute will be sufficient to expel a member. The evidence at trial of wrongful conduct in the opinion was not compelling, but the appellate court found that ultimately it was not necessary to make that determination because it was clear that the LLC could not be reasonably expected to continue with all of the members.

As the court noted, under subsection N.J.S.A. 42:2B-24(b)(3)(a), the plaintiff must establish that another member has committed wrongs that have “adversely and materially affected” the business of the LLC. In other words, the court reasoned, the requirement is for wrongful conduct that actually harms the business.

Subsection 3(c) of that statutory provision, however, has a “prospective orientation.” It is sufficient to show simply that the conduct concerned the operations of the LLC and was such that it was unreasonable to continue with that person as a member.

The only issue therefore was whether the defendant’s conduct, which admittedly related to the business’ operations, was such as to make it not reasonably practicable to continue with him as a member. This standard, the court held, had been established.

The mere fact that a member has been expelled, however, does not automatically entitle that member to be paid fair value for his or her interest. Rather, the court held, the effect of a dissociation is that the former member now becomes an “assignee” of the membership interest. An assignee is entitled to receive the financial benefits associated with that membership interest, such as distributions of cash, profits or losses that might be passed through to an individual tax returns.

Assignees have no right to participate in the management of the business, however. Thus, the result of an expulsion is that the former member forfeits any management rights, but can continue to receive all of the economic benefits of ownership.

Because New Jersey’s Limited Liability Company Act contains a provision that permits members to resign from an LLC at any time and be paid the fair value of their interests, the Appellate Division opinion does not leave the house to a member with no remedy. As the Court notes, the member can always resign, which triggers the obligation of the LLC to repurchase the former member’s interest.

An interesting issue that this opinion raises is that under the new law that takes effect March 18, the Revised Uniform Limited liability Company Act, the statutory right to resign from an LLC at any time has been eliminated. Another court might interpret the dissociation provisions of the RULLC are likely to be a significant issue in future limited liability company litigation. Like the current act, the RULLC does not contain any language mandating the buyout of a dissociated member’s shares. But the absence of a statutory right to resign could leave members without any remedy.