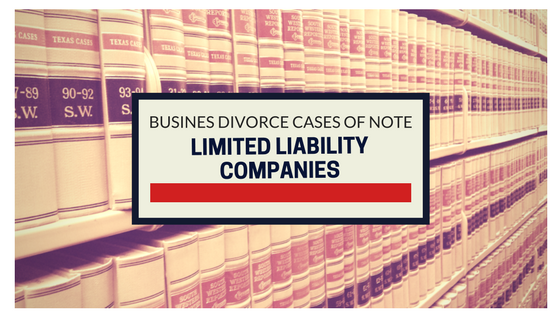 One of the issues that is often near the center of a dispute over the removal of a member from a limited liability company is when the expulsion should be effective.  In other words, if the plaintiff succeeds in getting an order expelling a member, is it effective when the order is first entered or does it relate back to some other event or date?

In this case, Headfirst Baseball, v. Elwood, 239 F. Supp. 3d 7 (D.D.C. 2017) opinion here, the court entered an order expelling one of the members of Headfirst Baseball based on his breaches of the limited liability company’s operating agreement, effective as of the date of the filing of the lawsuit. The case is significant as one of the few reported decisions considering expulsion under the Uniform Limited Liability Company Act and discussing the effective date of the expulsion.

Brendan Sullivan and defendant Robert Elwood were members and 50 percent owners of a limited liability company, Headfirst Professional, formed in July 2010.  Sullivan and his brother Edward, owned two other LLCs, Headfirst Baseball, formed in 1997 and Headfirst Camps, formed in 2012.  The businesses prospered but descended into a bitter legal fight among the owners..  Long, ugly legal battler over Headfirst Baseball ends. Elwood, for several years before 2012 made purchases with and took withdrawals from the entities of approximately $175,000.  Elwood contended that he had an agreement with Sullivan to use the funds for personal expenses, an argument disputed by the plaintiff and rejected by the jury.  Elwood also loaned himself $600,000 from the businesses.

Sullivan purported to terminate Elwood, contending that he was required to do so by the “morals clause” in an agreement that Headfirst had with the Red Sox professional baseball organization. Elwood retaliated by cutting off access to the company’s Google adwords accounts and securing from the bank a freeze on the company’s bank accounts in which about $600,000 was on deposit.  Elwood claimed he was entitled to take these actions as a manager and member of Headfirst.

The court held that while Elwood may have committed the acts complained of, the plaintiffs had failed to show any harm.  There was no evidence of lost campers, lost revenue or loss of customers as a result of the conduct.  The court rejected the claims arising from this conduct (breach of fiduciary duty and breach of contract) as the basis for the relief that the plaintiffs had requested.

Having rejected the claims for money damages, the court went on to consider whether plaintiff had established ground for expulsion of involuntary dissociation.  to do so, the court stated, plaintiffs must establish either that Elwood “(1) [e]ngaged … in wrongful conduct that has adversely and materially affected” Headfirst Professional, (2) “w]illfully or persistently committed … a material breach of the operating agreement,” ior (3) “[e]ngaged … in conduct relating to the company’s activities which makes it not reasonably practicable to carry on the activities with the person as a member,” D.C, Code  § 29–806.02(5).

The court rejected the first claim, that Elwood had adversely and materially affected the company, but did find that he could be dissociated for having willfully and persistently breached the operating agreement..

Given the circumstances of this case, in which the operation of the several Headfirst entities was closely managed by both Elwood and Sullivan, the Court finds that Elwood’s conversion of Headfirst Baseball’s and Headfirst Camps’ funds—companies Elwood managed in conjunction with Sullivan—and his acts of “sabotage” in 2013 with respect to Headfirst Professional—a company Elwood co-owned with Sullivan—relate to a matter of vital importance to the agreement between them, i.e., Sullivan’s ability to rely on Elwood to act in good faith as a business associate. The Court therefore finds that Elwood’s conduct warrants his expulsion as a member of Headfirst Professional pursuant to D.C. Code § 29–806.02(5)(B)

Elwood argued that he could not be dissociated retroactively. The court rejected that claim, holding that Elwood could be dissociated as of the date that the lawsuit was commenced.  The issue of when a judicial dissociation would be deemed effective is a fact-sensitive inquiry.  The timing of the suit, the Court held, indicated that it was not the misappropriation that led to Elwood’s termination that triggered the attempt to expel Elwood, but his acts of sabotage after the he was fire.  The timing, the court held,

suggests that the filing of Headfirst Professional’s lawsuit was prompted not by Elwood’s conversion of funds from Headfirst Baseball and Headfirst Camps, which led to the termination of his management of the company in December 2012, but by his post-termination acts of “sabotage,” two of which occurred shortly before Headfirst Professional filed its lawsuit in the Superior Court. … Just as the [Utah] court in Holladay based its determination of the appropriate expulsion date on the parties’ conduct, and in light of the circumstances present in this case, the Court concludes that May 3, 2013, the date Headfirst Professional filed its complaint in Superior Court, is the appropriate retroactive date for Elwood’s judicial expulsion..

Although the court seemed to distinguish between the contractual issues asserted in a counterclaim alleging that $2.8 million had been diverted by the plaintiff into other entities, it did not reach the merits of the claim, holding that the issues were identical to those raised in an untimely attempt by Elwood to amend his pleadings.  The court previously denied that motion to amend.