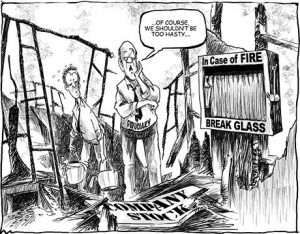 Gatz involved a limited liability company that owned the land where the Long Island National Golf Club is located, and leased the property to the golf course’s operators.  The plaintiffs alleged that the manager of the LLC had breached its fiduciary duty in not seeking the highest price in a sale of the property and purchasing the tract for himself.  Among the allegations were that the property was purchased by the manager at auction, even though third parties had already expressed their willingness to pay a significantly higher price.

The Supreme Court held the Operating Agreement, which prohibited deals with affiliated parties that were less favorable than those available from other third parties, unless approved by a 2/3 disinterested majority, covered all of the issues in dispute.  The interpretation of the statute, the Supreme Court held, was unnecessary and should be “regarded as dictum without any precedential value.”

The court then explicitly stated that it declined to express any views regarding default fiduciary liabilities existing as a matter of statutory construction.  Whether any such duties are created by the statute is “one about which reasonable minds could differ” and that the statute seemed “consciously ambiguous.”

The trial court relied on Sections 1101 and 1104 of Delaware LLC, 6 Del. C. §§ 18-1101 and 18-104(c), which provide first that the members may expand, restrict or eliminate any duty, including fiduciary duties and that in the absence of any statutory provision the rules of law and equity “shall govern.”  These provisions, from which the trial court found the existence of fiduciary duties as a matter of statutory interpretation, are substantially identical to provisions found in N.J.S.A. § 42:2B-66 and § 42:2B-67.

What does this mean to the owners or managers of a New Jersey LLC? If you follow the reasoning of the Delaware Supreme Court — and many judges will – then it is risky to assume that there are any fiduciary duties governing the relationships of the members and managers that are not specified in the operating agreement.

There is no controlling authority about the nature and scope of fiduciary duties among members and mangers in New Jersey and my own experience is that there is rarely a willingness to specify the duties of members or managers when drafting an operating agreement.  Provisions that restrict common fiduciary duties are relatively commonplace, but it remains to be seen how the courts will construe the ambiguous language.

One can certainly argue that a court asked to consider whether a duty exists should reason by analogy from the corporations statute.  Courts are often reluctant, however, to reach into another statute to create new rights, as was seen in decisions declining to find an implied caused of action for oppression from the fact that the corporations code contains such a right.

New Jersey’s new LLC statute will take an entirely different approach.  N.J.S.A. § 42:2C-1 et seq.  The statute sets out specific duties of loyalty and care, but gives members the ability to adopt an operating agreement that either eliminates those rights (with certain limits) or identify others.  The statute also expressly provides for an obligation of good faith and fair dealing and, subject to the business judgment rule, what appears to subject members and managers to liability under an ordinary negligence standard subject to the business judgment rule and a right to rely on expert opinions (both of which are sizable safe harbors.)

Thus the new statutory framework in New Jersey contains a clear enumeration of rights that the organizers must affirmatively, if they can, disavow.  The new statute’s creation of fiduciary duties is comprehensive and will be the subject of an upcoming post.

The new statute does not take effect for existing limited liability companies until March 2014 and it could be a costly error to assume too much from an operating agreement that is silent about fiduciary duties.  A close look at existing operating agreements and consideration of the changes brought about by statutory revisions may be in order.

And of course the time to look at these corporate governance issues is always now, before there is a dispute between the members.  Once that happens, it is invariably too late to make these decisions in a business-like fashion.

As always, we welcome your questions and comments.

In any case not provided for in this act, the rules of law and equity, including the law merchant, shall govern.